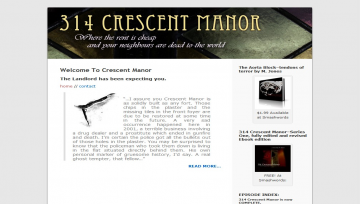 I’ve been a fan of Jones’ writing for a few years now. Her work is full of black comedy, suspense, memorable characters, and palpable atmosphere. 314 Crescent Manor is no exception.

Mark and Nathan Connor are estranged fraternal twins drifting through life. They know that something’s wrong, but can’t put their finger on what until The Event happens at Crescent Manor. Even after the supernatural (or quantum physics-related, depending on your point of view) Event turns their lives upside down, the siblings don’t yet have all the answers. A cast of supporting characters, each as wonderfully strange as conspiracy theorist and bohemian artist Nathan and straight-laced, too-serious Mark, helps them with their quest. The Manor itself, a decaying art deco apartment building, is as much of a character as its tenants. It’s eerie and unsettling, which makes you wonder all the more about those who live there.