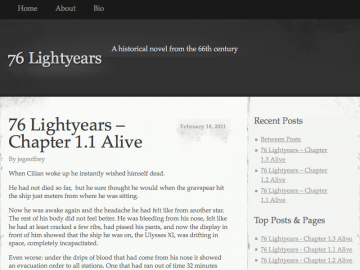 "A historical novel from the 66th century"

The civil war between the Progressives faction and the Conservatives is over. The battle of Galahad was a complete failiure for the Progressive forces. The isolationist Conservative faction has won, the Empire will not contact it's interstellar neighbours if it can help it. This does not really concern Cilian and James, two former members of the Progressive forces who are now stuck 76 lightyears from home, in the middle of a battlefield, on a ship that might fall apart every minute. They wanted to become heroes, now they just want to go home.

76 Lightyears has not been reviewed yet.

76 Lightyears has not been recommended yet.