A Fistful of Fire by Misti Wolanski 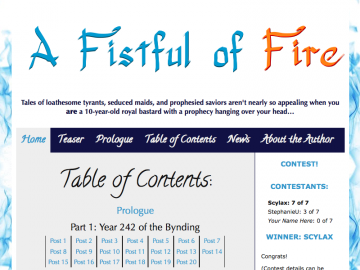 "Tales of loathesome tyrants, seduced maids, and prophesied saviors aren't nearly so appealing when you [i]are[/i] a 10-year-old royal bastard with a prophecy hanging over your head…"

Evonalé has never cared for tales of loathsome tyrants, seduced maids, and prophesied saviors. In the world of Aleyi, prophecies always come true. Evonalé herself is [i]supposed[i] to somehow free her grandmother’s enslaved queendom. But she’s merely a child, and her father is the powerful fire mage who subjugates the realm.

Evonalé has therefore fled home, her two half-siblings, and the father who really should’ve been her uncle. (She would flee her lethal but not quite insane faery godmother, too, if she could get away with it, but that’s a side issue.)

Unfortunately, it’s the middle of winter. Fortunately, following her mother’s directions puts her in another king’s hunting grounds. That king picks her up and gives her a place in his palace, to Evonalé’s bewilderment. The prince seeks her out to tease and befriend. Then one of Cook’s daughters starts teaching her magic, and a scullery maid impossibly proves herself immune to poison—making Evonalé realize that she isn’t the only one with secrets.

A Fistful of Fire has not been reviewed yet.

A Fistful of Fire has not been recommended yet.