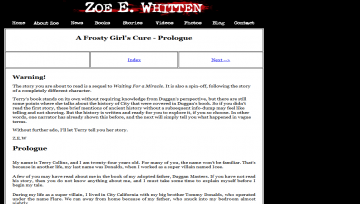 "A death wish isn't unhealthy if you were born immortal"

Terry Donalds was born a clone at the age of twelve, the victim of a gruesome vigilante killing spree in City California. Her killer, Duggan Masters (aka: Light Master), retired from crime along with his “sidekick” Leona, and in an ill-advised act of atonement, the former super villains opted to clone and adopt Terry as their only child.

But Terry is incapable of aging, and she displays the mixed up emotions of a 12 year old trapped in the chemical imbalance of puberty. Her mood swings are so strong, she’s changing weather patterns by generating freak blizzards during her temper tantrums. At 18 years old, she still looks 12, and her screwed up emotions often cause her to act the same.

Even Dr. Wallace Cornwall has been unable to help mellow her out, so during the Summer vacation of her 18th year, Terry returns to City California to seek the advice of her creator, half beast/half scientist Morgan Funeral. In her own words, Terry describes her hellish road trip to City with her friend and the myriad disasters that seemed to hound her from the moment she arrived.

Terry’s search for a way to die naturally will take her from her past as a super villain to a painful reintroduction to City as the leader of a superhero team. The journey will take her through three states; to the cold vacuum of outer space; and to an alternate dimension without superheroes.

Along the way, her misadventures might also teach her to appreciate life and learn to accept being different.

A Frosty Girl's Cure has not been reviewed yet.

A Frosty Girl's Cure has not been recommended yet.