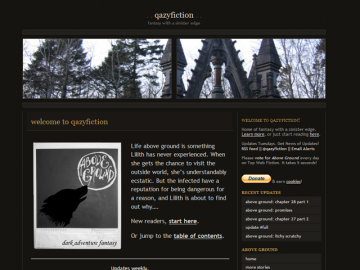 So you might have guessed from the title that I’m not a fan of werewolves.  Or psychics, for that matter.  The jury is still out on witches.  So writing this review was difficult, because this story is very far from appealing to my personal tastes.

That aside, I have to give the author points for writing a compelling tale about people and beings I couldn’t care squat about.  A.M. Harte can certainly spin a yarn, and knows how to keep the reader moving forward.

The story (so far – there are only 15 Chapters) revolves around Lillith, a human (or worm, or bland) who came up from the safe underground and got trapped on the surface with the Affected (or Infected), i.e. weres, pyres (vampires) and witches.  All she wants is to get back home, but it’s not that easy.  She was saved from a grisly death by the werewolf Silver, who is now very protective of her.

The story is not a “Gulliver’s Travels” style narrative.  It’s definitely Lillith’s tale, and I suspect there will be some romance between her and the werewolf, who has his own little interludes in the narrative. And if you like reading about weres and the way they interact as a pack and all that werewolf stuff, you’ll probably love this story.  Which I didn’t.  So I’ll stop talking about the story now, and talk about the prose.

Like most urban fantasy stories, the prose is functional but not elevating.  It’s clear though, easy to follow and not drowned in rubbish.  A.M. Harte does a very good job of revealing just enough information to let the reader make sense of the world without resorting to long boring information dumps in the prose.  The dialogue and character interactions are well handled and believable.

What I really liked, and I wanted to see more of, was the sense of wonder that A.M. Harte built in the first few chapters.  The world is quite complex and I found it interesting despite the races involved, and I would have liked to see it explored a lot more.  However that feeling of newness was lost as Lillith moved on with her story.  Which is fair enough, but for me it took away a lot of the fantasy element of the tale, and made it much more mundane.

In summary, while I’m not raving about the story, I can appreciate the skill involved in its creation.  A.M. Harte has shown that she can write well and knows how to construct a compelling story.  If you’re not an urban fantasy buff, I wouldn’t recommend it, but if you do like your paranormal beasties all brooding and protective, you’ll probably love it.