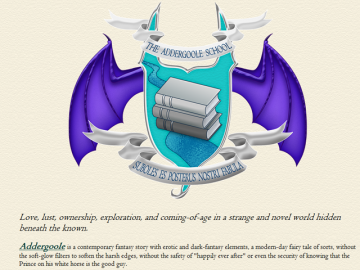 "A Vice Without the Bad"

Addergoole is like a favorite vice. It can't possibly be good for to read and enjoy it so much, yet it's impossible to put it down (or close the browser, rather) until the very last word. And then the itch starts. When will the next post be available? Lucky for all Addergoole lovers, it updates twice weekly on Tuesdays and Thursdays with bonus stories most Saturdays. Even when it takes a hiatus, it still posts guest stories.

Now onto what makes Addergoole so delicious to read. The series follows the stories of three separate students, with interludes for other students and even faculty, that begin their time at the Addergoole School. While the story begins slightly curious, with hints toward something darker, it isn't long before we're dragged into something all together more outrageous yet intriguing. The Addergoole school is for teens who are part of a race of fairies (by a very loose definition). The school teaches them the laws of their people and it teaches them how to control their powers as well as how to do workings with power words. The politics within the school are dark and foreboding, yet how many handle the Laws of their people, gives hope that just because they can do something, doesn't mean everyone will choose to do it.

Each of the three main characters experience Addergoole in a different way. And because they each are so different themselves, they handle their situations in varying ways as well. Shahin is a goth girl with a chip on her shoulder and a response for everything. She also has horrifying visions when she touches people. It's easy to see why she is so aloof. Kailani is your average girl with a whole lot of smarts and not quite enough confidence in the right areas. Luckily for her, she finds a Crew of people who are more than willing to show her the ropes of how Addergoole functions. Even if they do stand back to wait for her to decide if she wants to be owned by a total stranger. Jamian is use to being called a freak of nature. As a hermaphrodite, it's par for the course with him. But now that he's at Addergoole, it's only going to be more complicated because, yet again, he finds he's a rare "breed", but for a totally different reason.

Addergoole deals with friendships, falling in love and the boundaries that people set when they want to own or be owned under the Laws of their people. As dark fantasies go, this story has it all. Some of the magic and abilities seem a bit forced and awkward, but those things are easily overlooked when the characters and the story itself are so engrossing. I would recommend this story to anyone who enjoys even one of the elements that make Addergoole stick out as an excellent read.