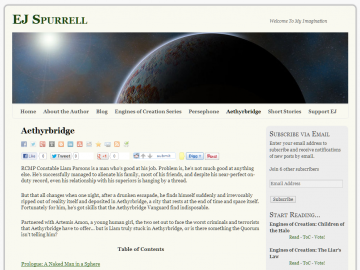 "A City of Wonders... which you can never leave"

RCMP Constable Liam Parsons is a man who’s good at his job. Problem is, he’s not much good at anything else. He’s successfully managed to alienate his family, most of his friends, and despite his near-perfect on-duty record, even his relationship with his superiors is hanging by a thread.

But that all changes when one night, after a drunken escapade, he finds himself suddenly and irrevocably ripped out of reality itself and deposited in Aethyrbridge, a city that rests at the end of time and space itself. Fortunately for him, he’s got skills that the Aethyrbridge Vanguard find indisposable.

Partnered with Artemis Amon, a young human girl, the two set out to face the worst criminals and terrorists that Aethyrbridge have to offer… but is Liam truly stuck in Aethyrbridge, or is there something the Quorum isn’t telling him?

Aethyrbridge has not been reviewed yet.

Aethyrbridge has not been recommended yet.