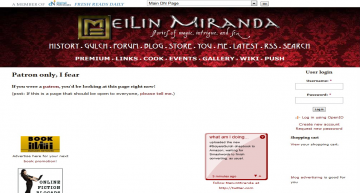 I started reading An Intimate History of the Greater Kingdom out of curiosity and not expecting much, but I found myself pleasantly surprised for a time.

Like Tales of MU, I appreciate how Mei Lin openly discusses non-mainstream sexualities in the story, though I have misgivings about how they are portrayed. As far as I read, which was quite extensively, often non-mainstream sexualities were treated as coping mechanisms for trauma or family issues. I think this can be dangerous, because while she acknowledges and even celebrates these sexualities, it portrays them as "not normal" and without possibility of being natural orientations of their own. Admittedly this may have changed since the last time I read.

I was intrigued by several of the story lines, especially the ultimate role and fate of Teacher, and the eldest royal daughter’s relationship across time with a strong woman leader. I also appreciated her deft use of violence that is realistically brutal, but doesn’t wallow in it like a gore-fest. Near the end of my time reading, I found myself dragging with the pace and quantity of the story, but I liked it enough that I think I’ll pick up the revised print edition.