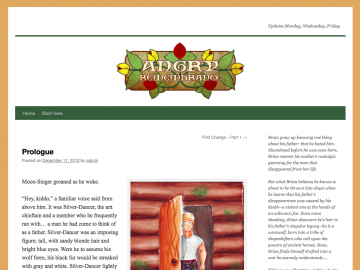 "I used to hate my father. Then I learned he was a legend."

Brian grew up knowing one thing about his father: that he hated him. Abandoned before he was even born, Brian resents his mother's nostalgic yearning for the man that disappeared from her life.

But what Brian believes he knows is about to be thrown into chaos when he learns that his father's disappearance was caused by his death--a violent one at the hands of an unknown foe. Even more shocking, Brian discovers he's heir to his father's singular legacy--he is a werewolf, born into a tribe of shapeshifters who call upon the powers of ancient heroes. Soon, Brian finds himself drafted into a war he scarcely understands...

Angry Remembrance has not been reviewed yet.

Angry Remembrance has not been recommended yet.