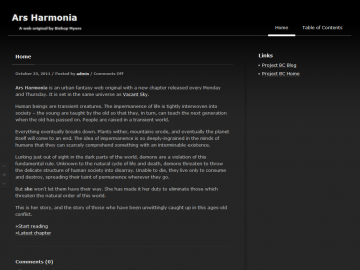 "Human beings are transient creatures. It's only to be expected that they fall to pieces when confronted with that which transcends time."

Human beings are transient creatures. The impermanence of life is tightly interwoven into society – the young are taught by the old so that they, in turn, can teach the next generation when the old has passed on. People are raised in a transient world.

Everything eventually breaks down. Plants wither, mountains erode, and eventually the planet itself will come to an end. The idea of impermanence is so deeply-ingrained in the minds of humans that they can scarcely comprehend something with an interminable existence.

Lurking just out of sight in the dark parts of the world, demons are a violation of this fundamental rule. Unknown to the natural cycle of life and death, demons threaten to throw the delicate structure of human society into disarray. Unable to die, they live only to consume and destroy, spreading their taint of permanence wherever they go.

But she won’t let them have their way. She has made it her duty to eliminate those which threaten the natural order of this world.

This is her story, and the story of those who have been unwittingly caught up in this ages-old conflict.

Ars Harmonia has not been reviewed yet.

Ars Harmonia has not been recommended yet.