Before The Dead by B, K 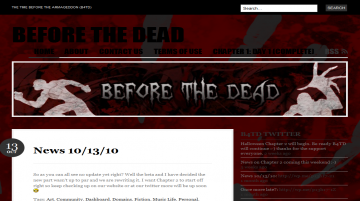 "The Time Before The Armageddon (B4TD)"

We do not have a memorial. We do not have land or settlements. We are on the run. Outcasts in a world we have created. It’s really almost fitting.

People are surviving. I don’t know how or why I have managed to survive. Maybe it was the crazy amount of video games I played that have allowed me to make it through this.

Modern life is not completely dead yet. To bad the days of running to the latest coffee house and spending 7 dollars on a cup of coffee are gone. I have 7 dollars in my wallet right now. To bad it’s kind of useless now.

Cars are a plenty now, but it is nearly impossible to find gas to make them run. Those environmentalists must be pleased. If there are any left alive. In a weird way I hope there are.

Avoiding people is normal. You never know who are the ones infected and who will soon be the ones to bite next. Stay with your “family” and avoid strangers at all cost.

We are a kind of makeshift family, one borne of trust and affection rather than blood. Replacing those lost with those who are now irreplaceable. They very well could end up as my legs, arms, and trigger pullers someday.

And that is my lesson to all of you. Pull the fucking trigger! Pull the trigger before it’s too late. To late for you, your “family” and for all of us. -B

Before The Dead has not been reviewed yet.

Before The Dead has not been recommended yet.