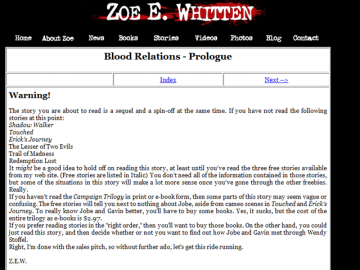 "The werekin crisis in Boerne is about to get very hairy..."

Jobe McKenzie and Gavin Lebowitz have survived the worst that the elites could throw at them, and yet, nothing they’ve investigated prepares them for the night when an orc-werebear drops into the path of their car.  Wounded in the fight, Gavin becomes cursed as a werekin, and Jobe is suppressed by the pills he’s forced to take, and by his more aggressive personality, the berserker.

The orc’s rampage on Earth keeps creating more survivors with the curse, and now the berserker has his hands full babysitting a pack of “furballs.” Not only does he have keep control of this new pack. He must also hunt down the orc and placate his handler in the FBI, Gary Wagner.

If that wasn’t enough trouble for one stressed out berserker, a local hunter is wounded by the orc, but avoids capture twice.  The hunter has sworn revenge against the orc, and the two-way manhunt ends in a bloody battle in the backwoods of Boerne.

Blind Rage has not been tagged yet. Help others find Blind Rage by tagging it!

Blind Rage has not been reviewed yet.

Blind Rage has not been recommended yet.