But An Earlier Heaven by LW Salinas 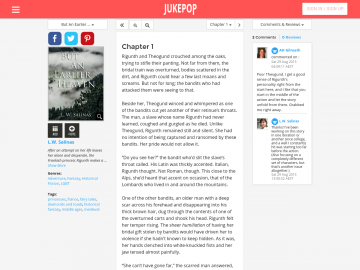 "An angry Frankish princess makes a deal with a fairy to track down a pair of sisters in exchange for a chance at revenge."

After an attempt on her life leaves her alone and desperate, the Frankish princess Rigunth makes a deal with a fairy to find two sisters from a legend in exchange for revenge.

The daughter of the feared King and Queen of Neustria, Rigunth of Soissons is on her way to marry her betrothed when her bridal train is overtaken by bandits. Instead of being merely robbed, her party is slaughtered, and she overhears a plan to kill her in the name of a queen. Furious, Rigunth escapes and stumbles upon a fairy in the woods who promises to help her in exchange for a piece of magic: two sisters, one blessed with gems and flowers to fall from her lips with every word, the other cursed with snakes and toads.

On her journey, Rigunth and the companions that she meets along the way find much more than they expected.

Loosely draws from the French fairy tale "Diamonds and Toads." Updates every Friday.

But An Earlier Heaven has not been reviewed yet.

But An Earlier Heaven has not been recommended yet.