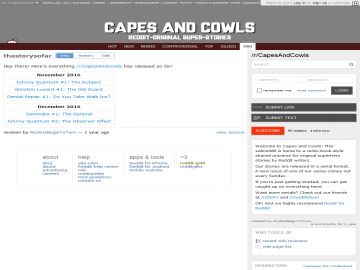 Capes and Cowls, a new shared-universe serial written by four redditors, offers not just one but four fresh takes on the superhero genre. The only reason I didn't rate it even higher is that it's only just started; if it continues to be this impressive, it could easily make 10 in my mind.

Each author is updating the tale of a different character. Johnny Quantum is functionally omnipotent, but he'd rather fight crime than be a god--the circumstances around his creation are far sketchier than he himself is. I'm intrigued by his true motivations and in how the characters around him, including beleaguered Rimsha, will react to the curveballs he throws.

Keegan, an oral hygienist, inadvertently becomes the go-to dentist for non-superpowered vigilantes to get discreet patch-ups after fights. His is my favorite so far, possibly because "dentists in over their heads" is a favorite bizarrely specific subgenre of mine, and I loved the teaser that came with the end of his first chapter. I can't wait to see how he gets pulled in to this universe.

Damocles offers the army his services as a hero hunter, but his motives are inscrutable in a very different way from Johnny Quantum's. I expect what he really wants to become a major plot point. Finally, Winston Luxard, an "old guard" vigilante grown old, decides to re-enter the game as a teacher. Like a star player becoming coach, except instead of sports, everybody's fighting for their lives. Winston is a fantastically likeable character with an interesting commentary to make on what awaits folks like Bruce Wayne and Tony Stark when they grow old.

Overall, Capes and Cowls is well worth your time, a universe with dedicated authors and an abundance of imagination. It's got amazing potential, so be sure to start early before all your friends start begging you to archive binge!