This is an old revision of this page, as edited by Erin_Klitzke at 01:48, 26 June 2011. It may differ significantly from the current revision. 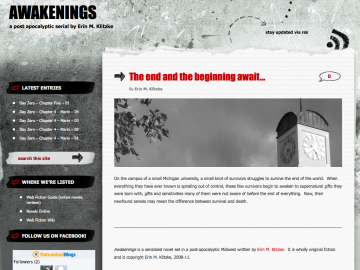 On the campus of a small Michigan university, a small knot of survivors struggles to survive the end of the world. When everything they have ever known is spiraling out of control, these few survivors begin to awaken to supernatural gifts they were born with, gifts and sensitivities many of them were not aware of before the end of everything. Now, their newfound senses may mean the difference between survival and death.

Marin Astoris had a vision a few years ago, of a mushroom cloud rising beyond the university's iconic clocktower. A voice whispered in her ear, take a breath and wait to die. That vision never came to pass. Something else happened instead: an asteroid, a botched attempt to stop it from hitting earth, and a resulting cataclysm that left only small pockets of humans left alive, scattered and isolated in a rapidly changing landscape.

Thom Ambrose's relationship with Marin has been on the rocks for the better part of a year. He's had visions, too, ones he's too afraid to believe are true, because if he dares to believe them, he'll lose the one thing he loves the most: her.

It's thirty-some college students struggling to survive the end of everything they've ever known. All they've got are each other and gifts they're just realizing they have, abilities they're struggling to understand. If they can make it through that first year, they might just have a chance.

Awakenings has not been tagged yet. Help others find Awakenings by tagging it!

Awakenings has not been recommended yet.