This is an old revision of this page, as edited by muses-success at 11:17, 31 January 2014. It may differ significantly from the current revision. 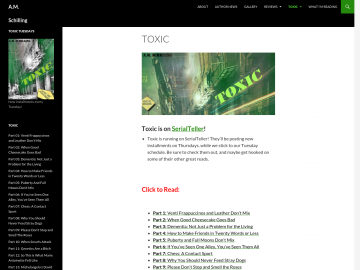 "A teen movie blogger finds herself in a real life horror movie, but who are the monsters and who are the heroes?"

Tizzy Banks has a problem. Everywhere she goes she bumps into something straight out of a fairy tale or a nightmare. From a werewolf with a thing for soccer jerseys to a leprechaun who slings coffee at a local pub, her new town is so high on the creep-o-meter scale that it broke it. Worse, the monsters have figured out she can see them–unlike most humans–and they’re hell-bent on bringing her into their group.

All Tizzy wants to do is work on her movie blog and get to know her absentee dad a little bit, but she’s got the werewolf following her around like a pet dog, a chess-playing dragon bugging her to go on a quest to find herself, and a bunch of dumb fairies flitting around town. They’re searching for a creature they claim is a threat to the community. Too bad the “creature” they’re looking for is Tizzy, and as far as she knows, she’s not dangerous. She’s also not up to handling a bunch of fairy hit men.

Now Tizzy has to figure out who to trust, why exactly she can see what she sees, and just what’s up with her father and his quirks before the fairies come knocking on her door. The answers she finds will be what she needs to defend herself from fairy justice, and maybe, hopefully, stay alive long enough to write her next post.

Toxic has not been tagged yet. Help others find Toxic by tagging it!

Toxic has not been reviewed yet.

Toxic has not been recommended yet.