This is an old revision of this page, as edited by WyattSalazar at 10:43, 04 April 2014. It may differ significantly from the current revision. 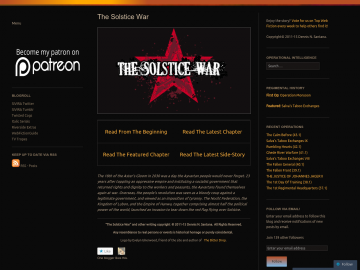 On the 18th of the Aster’s Gloom, 2030 D.C.E. (During The Current Era), the Nocht Federation, the Empire of Hanwa and the Kingdom of Lubon began their invasion of the southern continent of Ayvarta, with an aim to be rid of its Communist government decades after a revolution that toppled an Empire and struck fear into the high classes of the world. In the midst of a world-shattering war, the Ayvartan people struggle to cope with love, battle, politics, identity and destiny, as ancient legend, horrific technology and the waning magic of the world are thrown into a titanic clash. A serial fiction with notes of action, adventure, fantasy, socialism, military fiction, queer literature, and a World War II aesthetic.