Rising of the Serpant by Jack Brezler

This is an old revision of this page, as edited by muses-success at 12:04, 07 November 2017. It may differ significantly from the current revision. 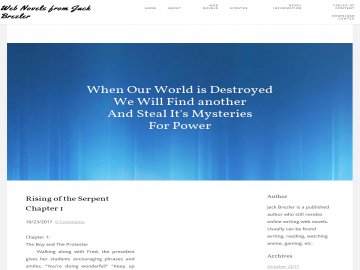 Humanity was barely able to escape the destruction of Earth caused by the creator, a creature from space that looks like a human. When humanity found a new world, they were soon given a power this world called magic. Soon, humanity took over the world, stating that the Ralicians could either live under strict rules in the cities or leave the cities and live in the outer edges of the sectors. Most of the Ralicians chose the later, while humans learned to control their magic with weapons meant to harness their power. Many years later, a boy named Adam enters Griffin Academy, the best school of swordsmanship in the world. So begins the story of the future's heroes.

Rising of the Serpant has not been reviewed yet.

Rising of the Serpant has not been recommended yet.