This is an old revision of this page, as edited by wereviking at 03:34, 04 February 2011. It may differ significantly from the current revision. 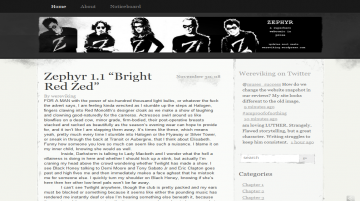 "A superhero webcomic in prose"

Zephyr is a prose webcomic influenced by postliterary writing and Sturgeon’s law. It’s 2009 on the eastern seaboard of the United States. The place is Atlantic City: a sweeping longitudinal metropolis designed by Frank Lloyd Wright following widespread devastation in 1984. Superhumans are not only real, they’re human. All too human, as Nietzsche would say.

Zephyr has not been tagged yet. Help others find Zephyr by tagging it!

"An astonishing achievement -- and ongoing!" permalink

I started reading the self-described Wereviking’s Zephyr chronicles half a year ago and was drawn in to the chaotic and dense style, the strong narrative voice and the very original take on the superhero genre, which is not something that would normally appeal. I cooled on the series when new posts related more to its secondary storyline—the main character Zephyr waking up in a parallel universe…Read More

Zephyr has not been recommended yet.