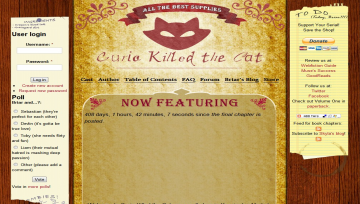 Other reviews by kiyara

"An occult shop with problems"

I discovered Skyla Dawn Cameron, when I stumbled onto her other on-going serial - "Children of the Apocalypse", and through there I started reading "Curio Killed the Cat".

Although there’s only 13 chapters or so of the story posted till now, it’s original enough to have captured my interest. Updating once a week instead of once a month is another plus when it comes to me.

Lilith - a succubus, who doesn’t want to embrace her heritage, and would always suspect any man interested in her, to be reacting to her powers instead of falling for her as a person, and for her intelect is one of my favourites in this story. If she only had a little bit more confidence in herself, I’m sure she could conquer the world. At the same time, she’s the only character for whom I always feel sympathy. I can’t say the same about the others, who just as some real people one moment grate your nerves and the other bring a smile on your lips. There’s also Maura - Lilith’s mother, who wants the best for her daughter - which in her language means getting her to date more and who can’t understand her daughter’s point of view or her reluctance at using the powers she was born with.

While it’s still at an early stage, but judging on the material posted up till now and on other works by Skyla, I’m sure it’ll be an interesting and enjoyable must-read.