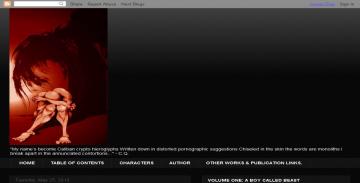 "“Through destruction there is truth…and in truth…there is creation.”"

Dividing Canaan: The Journals of Canaan Quintanilla, is the story of a boy caught on the edge of manhood; eager to leave a childhood of abuse, yet longing to stay in the safety of childhood dreams. A teenager caught between being an outcast and an insider with friends and family. A child, who wants to be loved, yet caught between being truthful about his desires and who society says a boy should love. And then there are his dreams, inhabited by the mysterious Mr. Cloak, that seem more real than the world he lives in.

This coming of age story is anything but typical. Overweight, gay, abused and in the midst of puberty, Canaan’s world is familiar, tragic and heart wrenching. Fueled by his desire to be accepted, to be more than he is, Canaan begins to re-make himself. When a classmate is found dead, another outcast, his resolve is shaken and he begins to question the purpose of life.

At the same time he finds himself pulled deeper and deeper into a dream world of violence and desolation; a dream world where he is the key to salvation. As this other world bleeds into his shattered reality he grapples with the loss of a Mother’s affection, the loss of his companions and the loss of himself in two worlds gone mad. The story takes place in 1997 in what I’ve always considered was a dangerous time to be a teenager no matter one’s location or background. The nature of the American teenager was spiraling, gravitating towards dark revolutions and even darker destinies. Not much has changed, but that’s really the point. Growing up is hard, but when you’re Canaan Quintanilla, that’s only half of it.

Dividing Canaan: The Journals of Canaan Quintanilla has not been reviewed yet.

Dividing Canaan: The Journals of Canaan Quintanilla has not been recommended yet.