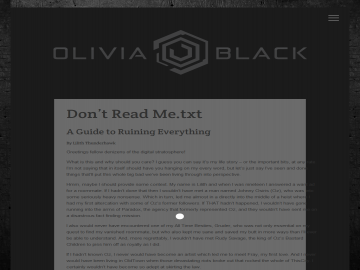 "A guide to ruining everything"

What is this and why should you care? I guess you can say it’s my life story – or the important bits, at any rate. I’m not saying that in itself should have you hanging on my every word, but let’s just say I’ve seen and done things that’ll put this whole big bad we’ve been living through into perspective.

Hmm, maybe I should provide some context. My name is Lilith and when I was nineteen I answered a want ad for a roommate. If I hadn’t done that then I wouldn’t have met a man named Johnny Osiris (Oz), who was into some seriously heavy nonsense. Which in turn, led me almost in a directly into the middle of a heist where I had my first altercation with some of Oz’s former followers. If THAT hadn’t happened, I wouldn’t have gone running into the arms of Paradox, the agency that formerly represented Oz, and they wouldn’t have sent me on a disastrous fact finding mission.

I also would never have encountered one of my All Time Besties, Gruder, who was not only essential on my quest to find my vanished roommate, but who also kept me sane and saved my butt in more ways than I’ll ever be able to understand. And, more regrettably, I wouldn’t have met Rudy Savage, the king of Oz’s Bastard Children to piss him off as royally as I did.

If none of these things had happened in the exact way they did, we would not be ushering in an era where every augmented human being is now a second class citizen, subject to the ever souring mood of the City AdMin Oversight Senate. Have I got your attention now? Good ’cause I’m only just getting started.

Don't Read Me.txt has not been reviewed yet.

Don't Read Me.txt has not been recommended yet.