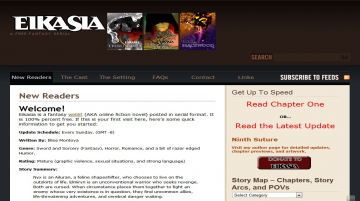 "Humor and Fantasy? I don't think so." permalink

Although initially threatened by the reference to ‘Seinfeld’ in the genre heading, the fantasy elements promising me ‘Xena: Warrior Princess, meets Lord of the Rings’ sounded much more promising.

Although the writer’s style is lovely and descriptive, and provides an informed look into the world, it does not seem to flow well, and I found it difficult to concentrate on the prose - it felt stilted and too structured.

The main character, a shape-shifter, seems a simple enough person, but there is more to her than meets the eye. While I initially thought she was a vampire or a werewolf, her cowardly nature and uncertainty quickly put that idea to rest.

This novel is ok, but it didn’t hold my attention. All the same, it’s worth a look, as I’m sure later chapters hold more promise for the determined reader. (And as I say, I like my fantasy true and traditional.)