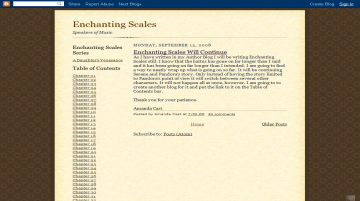 "I promise it's not music."

As far as I can see, this novel has nothing to do with musical scales, but rather a more exciting kind: Dragon scales.

The point-of-view is generally that of the protagonist, Pandora, but some scenes involve her new-found friend Serene (a half-elf girl). The two come from very different backgrounds, but it is clear from the beginning that the two are well suited to each other.

Incongruence in Pandora’s character (she is solid and described as ‘slow’, yet finds it easy to stand up to her abusive mother) is a off-putting, but the author promises to fix these problems in the newer version of Enchanting Scales that she is crafting.

Some of the detail included by the author, such as the mundane description of Pandora’s bedroom, weighs down on the reader, but helps to imagine the world forming in your head if you are that way inclined.

There are some minor spelling errors and missing words, which would easily have been picked up by a reader or two. As far as I can tell, this novel is lacking a little in audience, but it is certainly worth reading for lovers of light fantasy.