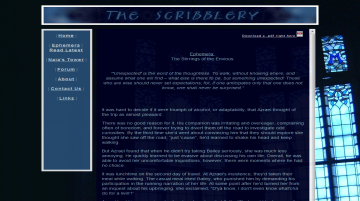 As of this writing, "Ephemera" has two chapters, with a third scheduled for release in a few days.  I spent a couple of days reading over the current chapters, reading them both twice, and overall, I don’t regret spending my time doing so.  Overall, I found "Ephemera" to be interesting, but with some major flaws that might deter an audience from trying to pursue reading it.

The prose is really dense, unnecessarily so in places.  The Scribbler has a very solid grasp of the English language and a good vocabulary which is used to its fullest, but the pacing of the story suffers a little from her willingness to use the entirety of the vocabulary at her disposal.  She doesn’t misuse words or anything, but she’s so eager to put so many good words to use that they crowd each other out and can make it a little difficult to know exactly what’s going on.

Alternately, there are a few places where the story suffers from "telling" instead of "showing," which tends to leech some of the suspense from the narrative.  While I personally found the close third person format to be interesting, there were a few times where I wished that Azrael had been paying attention to things instead of glossing over them in his self-important haze.  Not that I took issue with the Scribbler’s portrayal of Azrael at all; it’s mentioned in the listing and in the titles of the chapters that he’s a pretty arrogant sort, so the way he tells things is very in character for him, but there are times where the story might have been better served if we’d taken a small step back and been able to observe things without his arrogance filter.

I do not believe that these flaws make "Ephemera" bad by any stretch of the imagination.  I think it has the makings of a really interesting fantasy romp, and I do very much intend to follow it to see where the Scribbler plans to take her assassin and how he plans on getting out of the mess his arrogance has gotten him into.  There’s a lot of intrigue and subterfuge going on, and I very much enjoy stories that deal with such things.  If you are the same, "Ephemera" may very well be worth your time.