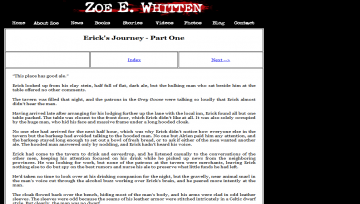 "Sometimes, the cost of knowledge is lost innocence..."

Running from the law, a young daoine sidhe (black elf) takes refuge in a tavern, only to discover that his drinking partner for the night is also wanted in the same kingdom.  After failing an escape attempt, Erick is escorted to see King Finrod along with the mountainous half-orc Luther.

They are both charged with the task of hunting down and collaring a group of werekin children who have invaded the neighboring orc territories.  The task would be hard enough without complications, but the hunting party must also deal with the interest of an ancient wyrm, Prom Orvest Dimitri.  Dimitri offers to train Erick in shadow magic, and, eager for a way to learn without studying, Erick agrees.  These lessons come with a cost, one that even Dimitri himself had not anticipate or intended.

When an orc war chief’s son is wounded and cursed with druid magic, the hunting party is pressed into service to hunt down and murder the orc before it can transform and wreck the balance of nature in Lissand.

Cold-blooded murder doesn’t sit well with Erick, and as his comrades harden their hearts, he begins searching desperately for an alternative.  Set against his allies, Erick does the unthinkable and sets out on his own.  But his righteous convictions may lead him instead down a path into darkness, and farther into the influence of Dimitri.

Part of the Mystical World Wars series, Erick’s Journey represent one of many entry points into the story.  It introduces readers to Lissand and many of the mystical races living in the dimension of the elves.

Erick's Journey has not been reviewed yet.

Erick's Journey has not been recommended yet.