Gathering of the Gifts by Robert William Shmigelsky 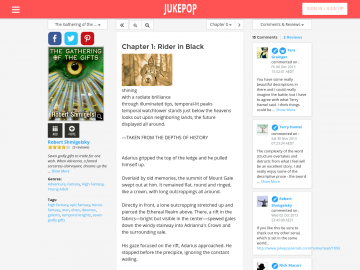 "The weight of Ages--in the hands of a temporal knight. "

Passages that could use with some trimming down or alterations (I apologize for not going into detail, but I’m a professional editor and sometimes I get carried away with short reviews on websites like this.):

“For the cross!” Illidan shouted. From what he had read, the glow from the brand of a temporal knight looked much like the aura that from within godly hands bestowed such a gift.

A spell of eagle eye could only perceive through keen eagle eyes.

He pictured the look Adrianna had given him when she first saw him, though he knew he would have been meant for another.

Plainly brought forth by a necromancer’s spell, the cloud stretched and grew on both flanks. The knights inside were attempting to reach the mountain pass before the lights reached their climax. Those foes, once Illidan’s brothers in arms, would know exactly what he had planned.

the temporal charge, or rather Illidan’s beacon of light, was also meant to provide a focal point for the last of his kind atop the mountain pass, so they might draw out the last grains of the hourglass and give them something to direct those precious moments toward.

The hosts of light and dark reached within themselves and unleashed their fighter’s rage. Illidan’s own charge quickened. Before the opposing forces met, Illidan lamented that it had come to this.

Malnourished human beings shriveled by shadow and gloom they were shown to be, pasty white skin and contorted bodies behind thick, unattractive dark robes.

Without the shadows to clothe them, it left Darkbane and his followers cringed back. The endurance emanating from deep within Illidan and his knights held them that way.

It pressed against him, tried to make him let go of the mental hold he had with the others. Speech came when no tongue was used. Word-like sounds came and went, all unfathomable—a language of wafting clouds. And the strain was felt. Darkness swept back around him, as if it was a coat for the world to put on, and Cyan’s forces resumed their pursuit. Though the sly, far reaching mind of Cyan Darkbane soon began to separate him from the others, Illidan held on. While he did, the grains continued to trickle down the hourglass, granting him and his knights the moments they needed.

Also, your talk of auras and some of the other magics could be a little bit more clearly described.