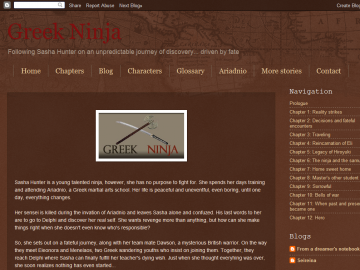 Greek Ninja is no longer available online. This page is kept around for archival reasons and does not appear in our main index.

"An original and exciting mix of Greek and Japanese culture" permalink

The thing that initially drew me to "Greek Ninja" was the title. I was interested in seeing how a story entilted like that would work out and I must say, although it wasn't what I was expecting to read, I was more than pleasantly surprised.

Thrilling and well-described fight scenes, suspense, funny moments and the use of Greek and Japanese -even Latin at one point!- are some of the best elements. Mythology is a key to the story, and being one of my favorite themes, I was very pleased, especially with the appearance of mythological creatures rather than just bearing mentions to the gods.

All the characters are unique, each with their own -often hilarious- quirks. The protagonist's character development though, was among the most impressive. Sasha started out with an unlikable -in my opinion- personality, however as the story progressed, she became someone I could admire. The friendship between her and the recruited members of "her group", although awkward at first, was a sweet theme, and her interaction with the male lead, Daichi was.... baffling. Seriously, I couldn't tell what their deal was!

The fact the setting changed between Greece and Japan made the story more refreshing and gave insight into the lives of two completely different nations. The portrayal of people from different countries and the general multinational feel of the story, which is particularly intense in the first chapter, have the same effect and provide a view of life from a more European perspective.

The first chapter took its time to get the main plot, and yes, it was a bit slow for my taste, although I did enjoy the way everyday life at Ariadnio was portrayed and getting to know the background of the main characters. Reading through that and getting onto the rest of the chapters, the story takes off, gradually becoming more and more interesting and soon enough, impossible to let go of.

My favorite arc was by far the third one, where most of the important events take place. How I saw it was that the first two arcs were the build-up to the main story, which is the third arc to me. From the twelve chapters, it takes over the six, and basically contains the essence of "Greek Ninja", so I consider it to be "the real story".

All in all, I found "Greek Ninja" to be a great read, especially since it so elegantly combined almost all my favorite themes (was thrilled to find a story that did that!) . It's a must for anyone interested in greek mythology and culture, ninjas, and generally, action. The fact the lead is a female and is strong, not once being shown to be incompetent or anything less than a human being, as is often seen happen in the adventure genre with female characters, is certaintly a favorable feature. Finally, an adventure with a character I can relate to!