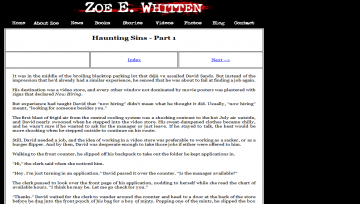 Okay, I reviewed this on my blog back in December but didn’t get round to reviewing it here until now.

Before I start this review I feel a warning is in order. “Haunting Sins” by Zoe Whitten contains mature material including references to sexual activity and pornography, which while central to the plot and not done for titillation (quite the opposite in fact) may be too much for some people. Reader discretion is advised. I’d also have to state that you shouldn’t read it at work.

Review: I liked this novella a lot. It’s wonderfully creepy and atmospheric with a subtle increase in terror and not too much gore. This is just how I like my horror. It gave me a J-horror kind of vibe and I’m a real fan of J-horror so that’s good.

I do feel the resolution could have done with a touch more foreshadowing. It’s only nine chapters, and the big clue comes in chapter Eight. That said any extra foreshadowing would have to be done carefully, or risk ruining the plot. This is also the reason I can’t explain this criticism any more clearly. I’d have to spoil a crucial plot point. But as I said it’s not entirely out of the blue and it doesn’t ruin the story.

Verdict: All in all I found this to be a strong Horror Novella well worth a read (though do bear my warning in mind). I think it would make a good horror movie too.