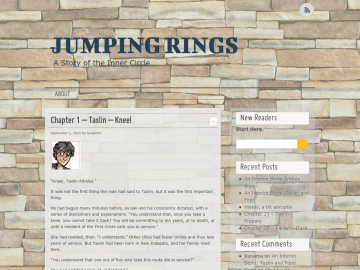 Other reviews by Unillustrated

Jumping Rings is a little hard to describe. The title comes from the setting. A very class heavy, almost caste-like, fantasy world. A city is divided into 10 "rings" with the innermost being the wealthiest and the outer most being the poorest. There are a few terms that are hard to follow at first. Most of these deal with gender, (male female or neutral) but it's not completely clear whether that's down to a physical difference or a difference in identity.

Everyone has to earn their final ring/status, it seems even the children of the most influential are not guaranteed a life in the first ring. Though they do seem to get a few advantages. Those without advantages can follow other paths. The story's protagonists, Valran and Taslin, enter into a form of voluntary slavery.

One will be used in gladiator style pit fights while the other is a body servant. It's pretty clear that both are ambitious and determined. The servant slave is utterly unsurprised when the first questions asked during his auction concern the sexual acts he's capable of performing without showing his revulsion. The gladiator has to balance her need to put on a good show with the knowledge that too much showboating could get her killed in the ring.

It strikes an interesting balance but the story isn't quite perfect. As I mentioned, some of the terminology is a little confusing. That's not a big deal, pretty much par for the course in any original fantasy setting. The gladiator's story line doesn't feel quite right. She picks up the relevant skills a little too fast and I didn't get the same feeling of physical danger with her as I did with the body servant.

Some of the current 'off' notes could easily be resolved by future revelations. It's too early to get the full scope but there are clear and obvious indicators of intrigue in both storylines. It wouldn't be shocking to learn that either is a plant of some sort, maybe a ringer.

If the intrigue pays off as well as I hope it does, this story could be very engaging. With that in mind, if you aren't bothered by a story that treats people as commodities or human life as disposable, this is well worth a look.