Kat and Mouse: Guns For Hire by Abner Senires 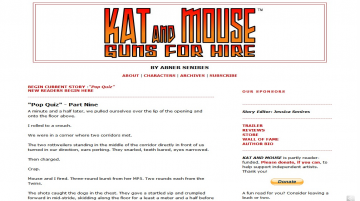 I appreciate a story about female heroes that don’t take any shit, and that’s basically what Kat and Mouse is about: two futuristic gun-toting, sword-wielding busty babes in the style of the Dirty Pair, wreaking havoc mission by mission.

The writing is very straightforward, more focused on action and dialogue than introspection, with sparse descriptions. The narration of Kat, laden with fluid slang, is on the mark, consistent and quick, and the highlight of the series. Kat’s relationships with her partner Mouse and her old mentor Murphy ground the story and give it its real force. The world is well-created, if not very original, and explained to the reader easily without slowing down the pace of the plot.

The slang is a good choice on the part of the author and well-done, consistent without being heavy-handed. It serves to make the action sequences more delightful than if they had been written in a traditional voice, while also giving us insight into Kat’s frame of mind.

There are two main negatives. The first is the repetitiveness of some of the scenes, especially the interrogation scenes, in which questions and denials go back and forth quite a bit. Some of the action scenes are less than should be as well. Several times the narrator, Kat, pumps herself full of “adrenaline stimulators and the world slid[es] into slo-mo.” When the world slows down, the fight slows down for us too. Fighting is chaotic, and the chaos doesn’t come across on the page.

Kat and Mouse: Guns for Hire is an action-packed series that recalls such anime as Dirty Pair and the lighter episodes of Cowboy Bebop. Happily, you don’t have to be an anime fan to enjoy the series. If you like adrenaline-pumping, gun-toting bounty hunters, this is a series for you.