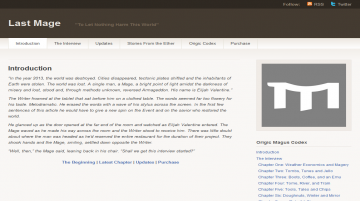 I've always been interested in Mages. Warriors can get very stereotypical in the Fantasy genre, and even the stereotypes of mages are a fascinating basis to start from. So one day, just on a lark, I typed in the phrase "last mage" into google to see what I would get: if it would be some kind of game or RPG stats for a variant class of spell-caster: because god knows there are a great many of those.

Instead, I found a story: the story that I am reviewing right now. In some ways perhaps it might not be fair for me to review Last Mage at this time. Even now that this story's time as a Web Serial Novel is over--that Andrew Eckhart continuously worked on for twenty chapters and many more parts later--it has and it is a work in progress.

The fact of the matter is that Andrew wrote this novel as a work in progress. From the very beginning, he made no secret of the fact. So yes. There were spelling and grammatical errors, but nothing that couldn't and can't be easily fixed. Some names changed. Some character motivations were expanded upon. He made this a very interactive process. He asked for feedback and he got it. Even now, he has even stated that he is still in the process of editing this work but we--and some people even more so with email subscriptions--got to see it evolve before our very eyes. It is a rare and good thing to see the creation and creative process of a novel and it is even more doubly so with regards to Last Mage.

So what is Last Mage? Last Mage is a story about a man named Elijah Valentine who gives a writer an interview with regards to how he saved the entire Earth and all of reality. It is nothing more and definitely nothing less than that. But I still feel as though I'm not doing it Justice or--should I say--I'm leaving Law out of it and only Justice. ;) Sorry I couldn't resist, if you read the story you will get my reference.

As for the feel of Last Mage: imagine Dr. Who, mixed with a little Sandman, StarGate, X-Files, and some superhero elements for good measure. Imagine following a team of very human--if not completely human--characters and beings and realizing that one person's story is only one focal point for an entire constructed world. This world can be unwieldy at times, but it is a work in progress and Andrew spends a lot of time, effort, and detail--particularly on the short stories he's included on his website--to create a really varied and complex world. I would even venture for you to consider that his world is--in some cases quite literally--multi-dimensional and events function in it on many different levels with the echoes of personal consequences resonating through each and every facet.

In some ways, this is a very straightforward story, but it is also very complex with enough moral ambiguity, unstated stories and philosophical quandary to be considered quite human. Overall, I see Last Mage becoming something great: if it isn't already and I just as I looked forward to reading each new part to the tale, I especially look forward to its sequel.

Andrew Eckhart is doing an excellent job because you know that a magical ritual--especially in fiction--is never ever quite finished.