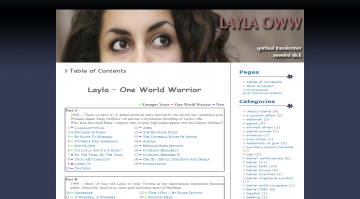 "Not sure what to make of it."

I want to first state that the concept of Layla — One World Warrior is absolutely fascinating.  It’s a sort of frame story about Layla Parkin, a young woman born into the Baha’i faith who later begins manifesting strange, godlike powers.  Most of what we as the readers see is a retrospective on her life from the vantage point of the year 2048, based on a "repository" of recordings about her and her life that have recently been uncovered.  There’s a lot of really interesting background on the Baha’i faith, which is in large part what motivated to keep me reading.

Unfortunately, Layla OWW has some problems stylistically, which caused me to have a very hard time keeping interested in it beyond chapter 21.  The narrative voice is very confused, skipping around from viewpoint to viewpoint with little warning most of the time.  It also has a tendency to be vague, to the point where I would have to read passages several times to make sure I knew what was going on, and even when I was reading closely it still felt as though I’d skimmed the whole thing.  There are pieces of narration that just feel like they’re missing all together.

This story also seems to be aimed at an audience that is familiar with Australian slang.  There were several times where I had to open another browser window and verify that I was reading context clues properly when it came to certain terms.  I’m not at all against adding such flavor, as it can give a story authenticity, but I was disappointed because the story expounded at length about the nuances of the Baha’i faith for the uninitiated but seemed to doggedly refuse to explain Australian slang to those who might be reading from elsewhere.

I’m tried desperately to read further, because the concepts are really fascinating and I am interested in Layla and her rise (and fall), but I ultimately gave up because I found the prose to be too difficult to deal with.