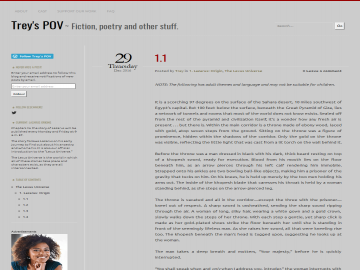 "Assume nothing. Question everything."

Lazarus is, essentially, a good guy who does bad things for good (or so he thinks). Corruption is the main issue Lazarus fights. In particular, corruption that oppresses masses and hidden corruption. Lazarus’s main opposition is an organization that dates back further than peak British colonization. Over the decades, the organization has donned many names from the public, such as the Freemasons, the Illuminati, or — as they’re officially called — Nexus. Nexus is a secret network of wealthy and/or powerful men who largely influence acts across the globe. They are the masterminds behind many of the events that are often associated with conspiracy theories. They are capable of hiding in plain sight due to modern day sensationalism, in which both the people and media overreact so hard to such conspiracies that it deems them ridiculous, despite how close to the truth they may be. Their motives are simple: maintaining and increase their wealth and power, at all costs, Among its most famous members include George Washington, Franklin D. Roosevelt, Winston Churchill and Benjamin Franklin, among other politicians and entrepreneurs. This group has its roots firmly planted in Europe with the rise of Christianity and Rome, later cemented by the British Empire. Lazarus is a direct descendant of Nexus’s opposition. Lazarus is an anti-hero because of his past. With history predetermined by an organization that only operates by using death as a weapon, he fights fire with fire. Lazarus often believes death is the only option, especially because justice systems fail so often. Upon learning of his destiny and Nexus’s involvement in his traumatic childhood, he seeks vengeance justice.

Lazarus: Origin has not been reviewed yet.

Lazarus: Origin has not been recommended yet.