Life after the Dead by Tyler Lowery 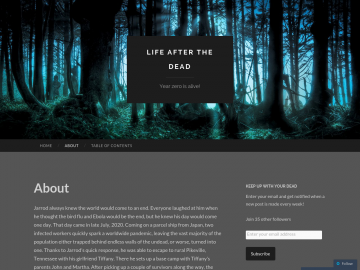 "What will happen after the dead walk the earth?"

He thought the bird flu and Ebola would be the end, but he knew his day would come one day. That day came in late July, 2020. Coming on a parcel ship from Japan, two infected workers quickly spark a worldwide pandemic, leaving the vast majority of the population either trapped behind endless walls of the undead, or worse, turned into one. Thanks to Jarrod’s quick response, he was able to escape to rural Pikeville, Tennessee with his girlfriend Tiffany. There he sets up a base camp with Tiffany’s parents John and Martha. After picking up a couple of survivors along the way, the small group now has to defend themselves against the end of the world as they know it, a zombie apocalypse.

Life after the Dead has not been reviewed yet.

Life after the Dead has not been recommended yet.