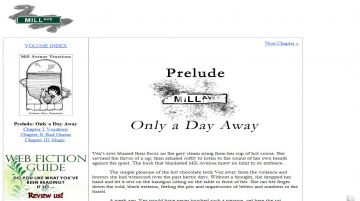 "Far from run of the mill..." permalink

Mill Avenue Vexations is brilliant. There. I said it.

Instead of reading the first few chapters, keeping a track of what I liked and what I didn’t, I was caught up in the story and was already at volume four by the time I looked up.

The story starts with a bang, but doesn’t fizzle out from there – it moves along quickly, but not at the expense of characterisation.

The mythology appears to be simple (for example, tarot cards are a large part of the plot), but subtle complications are weaved in – such as Vex’s inner demons. (Also, the tarot is explained as you go along, so there’s no need to worry – you won’t be left wanting for explanation as to what each of the pertinent cards mean).

Vex, and her supporting cast, are great – all are well-drawn from the get-go. (I also love the references to the many times Vex has punched people out – the world needs more feisty goth chicks).

Gore is alluded to, but not shown explicitly – this is a good technique, as one grows tired of reading in-depth descriptions of exactly how a body was mutilated.

I highly recommend it, and I’m looking forward to reading the rest of the volumes.

I hate to be disappointed.

Vex is a cab driver by day, and a cab driver by night.  Apparently (according to the prologue) she averts an apocalypse with the help of some street urchins.  There was reference to being an occult investigator, but I didn’t see much of that.  Mostly she wanders through her days, occasionally figuring out that something is amiss, but mostly just living.  Which is what all of the characters seem to do.  Mostly just living, with the rare moment of “lets mess with the occult”.

I wanted to like Vex, but I couldn’t.  I just couldn’t see anything of the character there.  I’m hard pressed even now to conjure up an image of her, a feeling of who she was.  Black boots and a lacy shirt do not a character make.  Who was she?  Why was she investigating the paranormal?  What were the repercussions of the summoning?  All of these things should have been answered in the first book, if not the second.  I never made it to the third.

The story lacked pace.  It meandered.  Even the moments of tension were so overloaded with frivolous detail that they lost all impact. The card reading could have been a slick, evocative foreshadowing of the coming storm, but was written with such dullness that I ended up in favour of the apocalypse.

I’m not the sort of reader who likes to follow someone around, watching the minutae of their day to day lives.  But I know this is very much a hallmark of urban fantasy.  If you like those Anita Blake novels, or Sherilyn Kenyon’s vampire hunters, you’ll probably like this one.  If you want tension and emotion a la Sharon Shinn or Sherri Tepper, give it a miss.