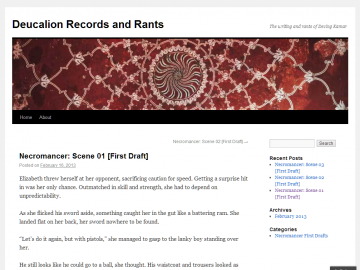 "A girl falls from hero to antivillain, leading monstrous armies against her homeland and its gods in a bid to resurrect the girl she loves."

Elizabeth is the princess of Arkhenia and Chosen servant of Ars Telura--the most important god, which makes her the most important Chosen. Unfortunately, the populace at large fears and distrusts her because her powers kill things.

Felix is her twin brother, Crown Prince of Arkhenia. He, like Elizabeth, was born without the tiny bit of magic everyone in Arkhenia has, which made people distrust him at first. Unlike her, his magic never 'came in', but he's become quite popular through his actions.

Kel Kess is the last goddess of Shadow and ruler of Narat, making her the 'Dark Lord' of the setting. Thing is, she's also a good-natured if cynical girl named Katherine who wants to make things better for her homeland and make lasting peace with Arkhenia.

Things kick off when Katherine comes to Arkhenia to try to work out their differences. In the end, things almost fall apart--but Elizabeth decides to go to Narat as an ambassador.

Things go uphill for a while, then they go very downhill. Katherine gets deadish, Elizabeth gets evilish, and Felix tries to stop her from destroying Arkhenia and killing all of its gods.

Necromancer has not been tagged yet. Help others find Necromancer by tagging it!

Necromancer has not been reviewed yet.

Necromancer has not been recommended yet.