Night of the Loving Dead by Tim Kay 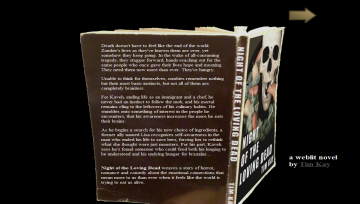 Death doesn’t have to feel like the end of the world. Zombie’s lives as they’ve known them are over, yet somehow they’re still standing. In the wake of all-consuming tragedy, they stagger forward, hands reaching out for the same people who once gave their lives hope and meaning. They need them. They’re hungry.

Unable to use their own brains, they remember only the most basic instincts, but not all zombies are completely mindless. For Kaveh, ending life as an immigrant and a chef, he isn’t used to fitting in. His mortal remains cling to the leftovers of his culinary habits, and he stumbles onto something of interest in the people he encounters. His awareness increases the more he eats their brains.

As he begins a search for his new choice of ingredients, things get complicated when Lisa, a former ally, sees recognition in the man who ended his life to save hers. Meanwhile, Kaveh thinks he’s found someone who might feed both his thirst for understanding and his undying hunger for braaains…

Night of the Loving Dead weaves a story of horror, romance and comedy about the emotional connections that mean more to us than ever when it feels like the world is trying to eat us alive.

Night of the Loving Dead has not been reviewed yet.

Night of the Loving Dead has not been recommended yet.