Pale And Gray by Inigo Sharpe 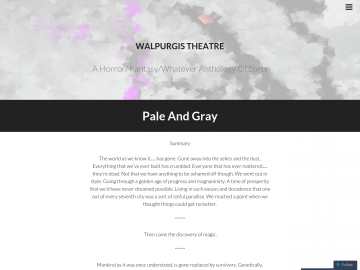 "An apathetic Knight goes about his buisness while three nations vie for control of the world."

The world as we know it….has gone. Gone away into the ashes and the dust. Everything that we’ve ever built has crumbled. Everyone that has ever mattered…they’re dead. Not that we have anything to be ashamed off though. We went out in style. Going through a golden age of progress and magnanimity. A time of prosperity that we’d have never dreamed possible. Living in such excess and decadence that one out of every seventh city was a sort of sinful paradise. We reached a point when we thought things could get no better.

Then came the discovery of magic.

Mankind as it was once understood is gone, replaced by survivors. Genetically, cybernetically, toughened made better. Made stronger, smarter, improved and advanced. Man and his interstellar lovers have left their children in the dust while the rich went out into the starlight to die. The children strong though. And strong is the only type of man that could possibly survive in the hell hole the old civilization left in their passing. They weren’t just drop kicked into the dark age. By the point of this tale the new world has barely made it past the heyday of the post agricultural living. Tiptoeing its way into an industrial boom as populations slowly rise. They had their towns and they had their villages but having actual countries is something new and tentative. The only problems is the monsters. The Monsters and the darkness that they bring. Poisoning the world and consuming its peoples. But that too can handled. The ingenuity of man will find a way and even the world will do ought rather simply letting itself die. There are powers about who have taken measures. Of which a certain Nikolas Marlowe is one. The Poor bastard Should Have Known This From the day he was born. It’s alright though, for a man shoe-horned into the role of monster slayer he certainly has enough experience on his side.

Pale And Gray has not been reviewed yet.

Pale And Gray has not been recommended yet.