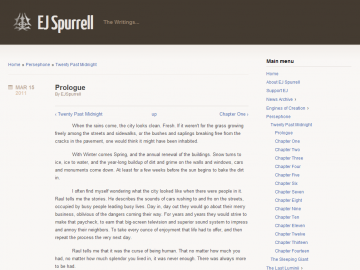 "Twenty years ago the world ended with a whimper... Today, it begins again with a bang"

The Persephone virus swept throughout the known world, bringing civilization to its knees within days.

Now, twenty years later, the survivors of Persephone have adapted to a new life in the remnants of the old civilization. The world is littered with small communities of traders, gangs, slavers and religious cults. One thing is certain. There is no law. There is no order.

But when Aeryn Ishii, a young woman raised entirely in a world based on the leftovers of the old, comes across Hunter, a mysterious stranger with a hidden past, she finds herself suddenly involved in a plot that could result in the complete destruction—or salvation of what’s left of the human race.

This is the way the world ends. Not with a bang, but with a whimper.

This is the world of Persephone.

Persephone: Twenty Past Midnight has not been reviewed yet.

Persephone: Twenty Past Midnight has not been recommended yet.