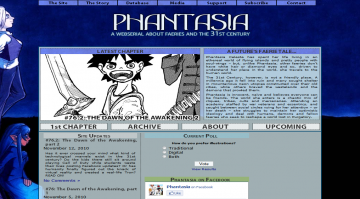 "entertaining, but a little rushed"

Phantasia is a faerie, but she is a faerie unlike any other; she is unique, both in looks and in magical skills. Brought up by water faeries, always feeling a little misplaced, Phantasia struggles to determine who she is and where she belongs. This search for her identity ultimately leads her to a high school on Earth, where she begins posing as a student.

The author has clearly put much thought into world-building, particularly how the faerie domain differs from the human one.  I like the differences between the various elemental faeries: water faeries are logical and able to read minds; fire faeries are passionate warriors; and so on. There are even differences in architecture, for example the water faeries’ home is filled with ankle-deep water.

What was disappointing was that all these interesting aspects about the faerie world are mentioned in passing, and never given enough depth.  Chapter 1 ends with Phantasia deciding to visit the other faerie queendoms, but Chapter 2 begins with Phantasia’s return to the water faerie home.  It is subsequently mentioned how much her journeying has helped Phantasia grow, and not having seen that growth first-hand is frustrating for the reader.

The prologue is confusing, and the first two chapters are perhaps misleading, as they give the reader an expectation that this will be an adventure story, not a school one. This transition would perhaps have been less jarring if the adventure scenes (a big battle, a search for the world’s axis) hadn’t been so rushed; the difference in pacing between the first two chapters and subsequent ones really highlights the shift in genre.  It seems as though the author has so many ideas about what can happen next in the story, that each idea is not explored to its full potential.

The characters are a little difficult to connect with emotionally, which is possibly because Phantasia herself has problems identifying with those around her.  Phantasia is well-characterized, but the story would benefit from giving secondary characters a little more depth.  It doesn’t help that certain plot points (such as one of the faeries acting mysteriously) are just dropped as soon as Phantasia becomes involved in something else, without any indication that it will be picked up again in the future.

As for the writing itself, I think it could benefit from a little more emotion and suspense; the reader hardly ever feels concerned for the main character because the evil aspects are glossed over and the action scenes lack tension.  For example, Phantasia herself, despite her protected upbringing, seems unmoved when witnessing a large-scale battle.

There are also a number of grammar and spelling mistakes, particularly punctuation errors. There are also some oddly constructed sentences which can be distracting.

The website itself is pretty, easy-to-navigate, with eye-catching artwork, so no complaints there.

Overall: despite the various problems I’ve mentioned above, Phantasia is an entertaining read. The setting is particularly intriguing, and I think the author would do well to dig a little deeper and expand on all the ideas, rather than rushing through them.