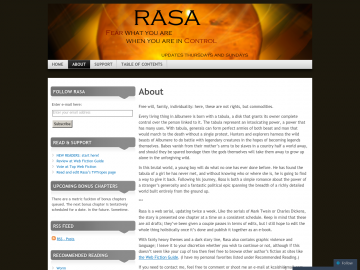 "Fear what you are when you are in control."

Free will, family, individuality: here, these are not rights, but commodities.

Every living thing in Albumere is born with a tabula, a disk that grants its owner complete control over the person linked to it. The tabula represent an intoxicating power, a power that has many uses. With tabula, generals can form perfect armies of both beast and man that would march to the death without a single protest. Hunters and explorers harness the wild beasts of Albumere to do battle with legendary creatures in the hopes of becoming legends themselves. Babes vanish from their mother’s arms to be slaves in a country half a world away, and should they be spared bondage then the gods themselves will take them away to grow up alone in the unforgiving wild.

In this brutal world, a young boy will do what no one has ever done before. He has found the tabula of a girl he has never met, and without knowing who or where she is, he is going to find a way to give it back. Following his journey, Rasa is both a simple romance about the power of a stranger’s generosity and a fantastic political epic spanning the breadth of a richly detailed world built entirely from the ground up.

Rasa has not been tagged yet. Help others find Rasa by tagging it!

Rasa has not been reviewed yet.

Rasa has not been recommended yet.