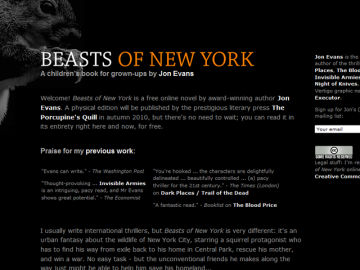 Beasts of New York is not what I expected it to be when I clicked the link – I was expecting, frankly, a literal anthro squirrel protagonist, a human with a huge fluffy tail, that kind of thing.

I was pleasantly surprised.

It’s definitely far from the norm – but there is something that keeps you going, something intriguing about a protagonist whose perspective is mere inches from the ground (or tree branch). You get to see a side of New York that’s rarely explored, this isn’t the world of high fashion, or big business. It’s world of animal courts, of animals with the title "Lord" or, in the case of the hawk, "Prince".

It’s captivating – you can feel the fear of the "death machines" and the mixture of fear and horror when the first animal is murdered, the dread of our protagonist being captured by a hawk with a Captain Barbosa sensibility when it comes to following the terms of bargain.

The MC, Patch – is a wonderful POV character, and the cast that surround him are wonderful – a mother concerned only with feeding her children and her husband who makes a deal in order to do so. Twitch, a nervous, jittery squirrel with the amusing habit of stating the obvious. Duffa, a – ahem – bird-brained homing pigeon who is hopeless when it comes to anything but directions.

The plot moves at a reasonable pace, setting up all the characters, as well as the situation in an economical number of chapters. The chapter length is Goldilocks good – not too short, and not too long.