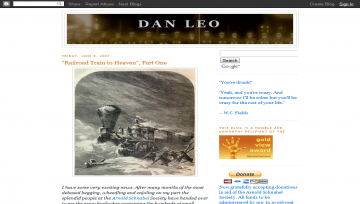 "A Surreal Comedy of Manners"

The day is coming when genre categorizations will collapse around our ears. No one would shove a copy of The Master and Margarita into the fantasy section of a Barnes and Nobles, although it has many things in common with the glossy books that you would find there - talking cats, the devil, levitation. But Bulgakov's masterpiece is given the honor of being considered surrealistic social satire instead of fantasy. The same could be said for Dan Leo's Railroad Train to Heaven. I realize that by making this comparison I am entering into the whimsical game that Mr. Leo plays at the start of every episode. He gives us an overblown imaginary quote from Harold Bloom, taken from the pages of the most unlikely magazines possible.

“Little did we oh-so-earnest literati of the latter half of the twentieth century know that a former brakeman for the Reading Railroad by the name of Arnold Schnabel was calmly composing, in complete obscurity, that massive memoir which we now recognize as the great American epic.” -- Harold Bloom, in Better Homes and Gardens.

This is a joke with intent, a little party game that sets the tone for Railroad Train to Heaven as a whole. The work is presented as the autobiography of one Arnold Schnabel, a man of long errands and gordian social entanglements. Arnold is recovering from a nervous breakdown, which may account for his penchant for visiting heaven, entering into contests with the devil, and allowing time to work at a radically different pace than it normally does. The story is set, at least terrestrially, in Cape May, N.J., in the summer of 1963.

I came to Railroad Train to Heaven very late in the game. I've been reading it for about two months now, and haven't gone back to the beginning. Reading it has been my first major involvement with internet serial fiction, and I wanted my engagement with it to be different from my engagement with short stories or novels. A nice little episode delivered to me every week, which I can read with pleasure without thinking that I really should undertake the Herculean labor of becoming a completist. The average post is 2,000 words, which means that, after two-hundred and fifty-one episodes, Railroad Train to Heaven is nearly as long as War and Peace.

Fortunately, Arnold Schnabel's narration doesn't require much back story to be enjoyable. This is a minor miracle in itself. As Arnold wanders around Cape May, he runs into multiple characters whom, I assume, he and the reader have met before. But Dan Leo's individual descriptions of these characters are so precise and compelling that they never get lost in the welter of personalities. This is a particular strength in the writer of internet-based serial fiction. A scrupulous attention to detail and the ability to describe clearly will get you far and help you avoid the besetting sin of any fiction, that of annoying the reader.

Internet-based serial fiction, whether it's blog fiction or Podiobooks or anything else, is as much about the author's personality as it is about the story. When I sit down at my computer every week and contemplate opening up Railroad Train to Heaven I have only one real question for myself. Do I want to spend time with Dan Leo? I'm not worrying about what's happened to Arnold, since I know that he will still be meandering from place to place without any major complications (his story arc, while not being static, is only slightly convex). It is the way in which Dan Leo tells his story - the pithiness of the language, the flow of the dialog, the underlying humor - which brings me back for more.

I realize that, in the course of this review, I've compared Leo with two Russians. Like the great Russians, Leo is writing about a particular society, and his intent is simply to describe it. None of his characters seem to suffer from social isolation or post-modern confusion. They all co-exist happily with each other in a cocktail-laced mid-sixties style bonhomie. Railroad Train to Heaven is, essentially, a comedy of manners, one that is generous to the reader in a way that is, simply, mannerly.