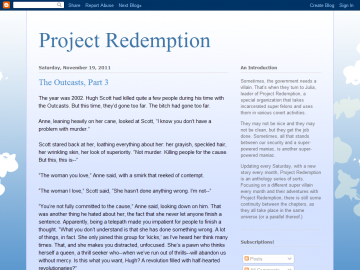 Other reviews by Unillustrated

The writing on this is legible. That's about the only nice thing I can say.

Without spoilers for anyone who might want to read anyway, this is a superhero story set in more or less the current world. Your basic DC/Marvel type setup. Anyone who's read the Suicide Squad will recognize the basic premise, super criminals are offered reduced sentences in exchange for putting their talents to use for the government.

What isn't clear is just why they're needed. The story involves Fenris, yes the literal Norse wolf of destruction, being used to guard a sorority. As amusing as that image is, there's no clear reason why it has to be him. Why can't a regular hero do it? Why can't a less Ragnarok-ish super do it?

The dialogue is easy enough to follow but the action scenes are very disjointed. There's more than one abrupt transition that I had to scroll up and reread to figure out. If I thought that was just a mechanic to show the character's own confusion or disorientation that'd be one thing but it just felt weird.

Each story has the common theme of being tied to project Redemption but aside from that they're just a series of unconnected events. There's no obvious common thread or any sense of continuity.

I liked the basic premise but that's just not enough.

The author does have something here. Enough work and I'd be happy to take another look.