Children of the Apocalypse by Skyla Dawn Cameron 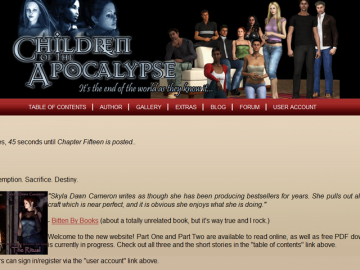 Other reviews by Ziggy

Opener: When I first read the title of Skyla Dawn Cameron’s “Children of the Apocalypse” my first thought was one of dismay. I was assuming that it would be a web novel about teen saving the world and I was right. I also assumed that it wouldn’t portray the teens the way it should. While surprising – though pleasant – I was wrong. Most times when you have someone writing a teen view they focus only on the story not on the teen’s everyday dramas. Especially when the so called teens are trying to save the world from some not-completely-identified threat. Skyla however managed to work the everyday dramas (and some of the not so everyday ones) into the story in ways that either causes you to feel sorry for the characters, or to laugh at their mentors and them.

Pros: The story is for once devoid of overly common clichés. While one can never avoid one or two I found it free of most of the overly common ones. It was a happy day to see that. I was also glad to see it free of sickening amounts of teen angst. Angst – while amusing – becomes irritating to reader like me in large quantities. I have had enough of my share of angst for one. If you want something with angst in amounts that isn’t overwhelming you’ve found a good little story.

The chapter length is perfect. Nothing is too long for a good before bed one chapter reading but it’s also not short enough to leave you on cliff hangers until the next chapter. Skyla has managed to find a fairly good balance for the size of her chapters.

Finally, the page layouts. I, personally, like it. Not everyone enjoys dark colours for their reading material but I enjoy it when reading supernatural or urban fantasy novels. You never want the lights on for a good horror movie so why should you when you’ve got evil murderers and monsters just around the bend in a fine book. It sets a good ambiance when reading for me.

Cons: While I loved the layout out for when I was reading, navigating wasn’t quite such an enjoyable venture. It wasn’t the worst I’ve ever had to deal with but it was far from the best. Everything feels too crammed into the center divider. I wish it was a little bigger to give more room for all that is on it.

The active community. Or lack thereof. While I guess there must be quite a few people who read this I wonder vaguely if people just joined to be on a bandwagon of sorts. As I was glancing through the comments I notice there are generally people who keep coming back to comment, the same people though. Yes there are quite a few compared to some but for the amount of time this has been around the active community seems to have abandoned it.

I wish Skyla was a little more descriptive of her characters in the writing. While she has pictures up yes I wish that when writing about a characters look she would go into more detail. Not much more but just a little more. She does fairly well with Genevieve and later on with Meredith but Sage seems to have gotten to little description in the writing. This may have been my own misreading but I didn’t figure out Sage was black until I went and looked at a picture of her in the gallery.

In closing: The few slight problems in it don’t take away from the experience nearly enough for me to say not to read it. I myself am going to start recommending it too all my online friends and I will to anyone who reads this as well.