Akačehennyi on a Diet of Dreams by Kayleigh Ayn Bohémier 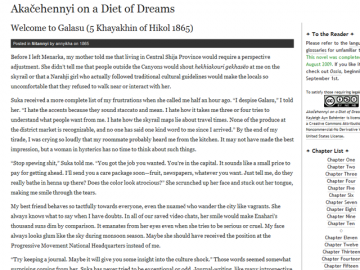 " political intrigue in a futuristic setting"

This is an unusual story which seems to straddle genres.  It has the advanced technology reminiscent of futuristic sci-fi novels, it has immortal (or long-living?) beings who share collective memories, it has a tinge of romance and relationships, but ultimately it is a thriller, a story of political intrigue.

Salus, the main character, is an ambitious woman who has recently moved to the capital city in order to advance her political career.  The move is not easy, because her dress sense and mannerisms mark her for what she is: a foreigner.  Soon, Salus finds herself swept up by the rush of city life, and eventually becomes caught between love and duty, as the woman she is involved with seems to have a rather shady past.

The story is set in an alternate universe, a world which seems to have a number of Asian influences.  Because the main character’s foreignness is of importance to the story, the author highlights the different cultural conventions, and interspersed amongst the prose are sentences in other languages.  This technique is useful in that it gives the reader a sense of the unfamiliarity Salus experiences in the new city, but sometimes the amount of unfamiliar terms becomes overwhelming.  The author has included a comprehensive glossary, but I think the story could have benefitted from having more explanation within the prose itself.

While on the one side the story has all these cultural conventions, giving an impression of tradition and ancientness, other aspects are very futuristic.  In this respect the setting was well-planned and evocative, so kudos to the author for that.  Parts of the story reminded me of Brave New World, particularly the Dream Garden, a holographic form of entertainment reminiscent of the ‘feelies’.

The chapters are short, bite-sized, and quick to read: I finished the novel in just under a day.  As for the writing itself, the language is colourful and descriptive.  It is written in a diary-entry style, but avoids any rambling stream of consciousness.  My only complaint would be that, because it is written as a diary, the protagonist is telling the story from a future perspective, which makes the story slightly less involving than it could be.  I think the author could have injected a little more immediacy into the prose, to heighten the suspense.

What’s most interesting is that the protagonist is writing in what she calls a ‘smart journal’, which seems to work like a computer.  The story thus incorporates not only traditional prose, but sound clips of the protagonist speaking, drawings, changes in font size and colour, and so on.  From a technical viewpoint alone, this interactivity made the story stand out to me.

As for the website itself, the layout is simple, and there is a full table of contents on the left-hand side.  It would have been helpful, however, to have a ‘next’ button at the bottom of each chapter, as I had to keep scrolling up and down the page to find the button for the next chapter.  The font could have also been a little bit bigger.

Overall, an intriguing plot line and evocative setting.  The use of multiple mediums (prose, sound, and images) is original and entertaining.  Worth checking out.

(And sorry for the extremely long review.  I tried to be succinct, honest!)