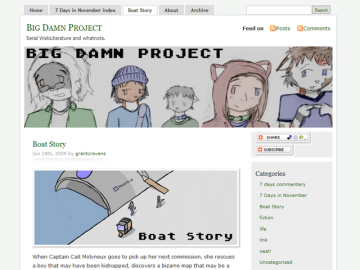 Boat Story follows the adventures of Cait, Captain of The Rose. There are only 9 parts up, and, while off to a slow start, there are already several developing plot lines which seem interesting, amongst which: an evil killer pirate hunting for a map, a mysterious boy whom Cait rescues, and of course the tangled relationships between the crew of The Rose.

The world is a rather interesting one, with a mixture of human and animal races. Although much is left unexplained at the moment (understandably so, with so little posted!) there is a sense of careful world-building, of clashing politics between continentals and islanders and between animals and humans. The sea is (obviously) a pivitol setting, and it is interesting to see the various ways in which the influence of sea-travelling is shown, such as with a boat/circus.

The writing itself is quite good, although I think it could do with some careful proof-reading, as there are a smattering of typos. The story also occasionally falls into the ’show, don’t tell’ pitfall, with back-story asides or descriptions which slow down the pace. It doesn’t help that the point of view in some parts jumps between characters mid-scene, which can be a little confusing. I think the story would benefit from having a deeper, more limited point of view, to give readers a point of reference in what is an unusual and unfamiliar world.

I also think this story could do with some editing for tighter copy, particularly to inject a little more suspense into the writing. This is a problem quite common to webfiction, especially so in the first few chapters, and so I expect the story will pick up quite soon.

The website is easy to navigate, so no complaints there. I also found it interesting that each chapter comes with story notes, giving background information and insight. Kudos to the author for that.