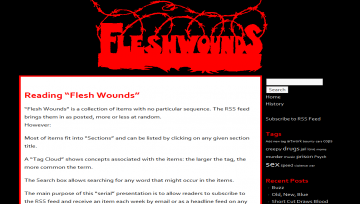 "experimental, but with little substance"

A disclaimer: I generally post reviews only after having read a good proportion of a story (at least 50%, if not everything posted). I’m not entirely sure how much of content I’ve read of Flesh Wounds but – to be honest – I’m not interested in reading more.

Flesh Wounds is a collection of stories examining the darker sides of life – prison, violence, crime, and so on. Given that there are very few short story collections out there, I thought I’d give this one a try, since you can only read so many serials simultaneously.

To start on the positive side, a strength of a short story collection like this one is that anyone can jump in and start reading, without feeling like they have backlogs of content to get through. And given that they are all of a similar genre, there is a certain coherency between posts.

But I have to say I was disappointed. The short stories themselves had little plot, jumping around in time, much more character-focused than plot-focused. Perhaps I have a wrong expectation of the genre, but I expected a lot more meat and action, rather than the copious telling that occurs.

I also found the writing style off-putting. The tone itself felt, to me, quite put on, like that of cheesy Mafia film with a voiceover telling you in a faux-Italian accent about how tough life is.

The tone strives to be involving, in that it is informal and aimed directly at the reader, however it falls short of being engaging, because it is very hard to get a sense of the narrator. Only the barest scraps of details about the narrator are given, in a rambling stream-of-consciousness style that jumps back and forth in time, which, as you can imagine, is quite hard to sink in to.

Then – something which I found jarring, given the rather informal tone – there is often a discrepancy between the narrator’s voice and the author’s, the latter sounding much more formal, particularly given the slightly unusual overuse of quotation marks.

That said, the writing does have the occasionally striking image, but I don’t think it is sufficient to compensate for the aspects of the writing which I didn’t enjoy.

As for the website itself, the layout and colour scheme were fairly simple, clear and uncluttered – a definite strength. However, the lack of sequential navigation really aggravated me, in that it was hard to judge how much content I had read, and how much was left to read.

I do think that using tag cloud and categories is an interesting method of presentation, but I believe it should supplement a traditional table of contents, rather than replace it.

In short: kudos for the experimental style, very different from the average story up there. Unfortunately, the writing could have been better executed.