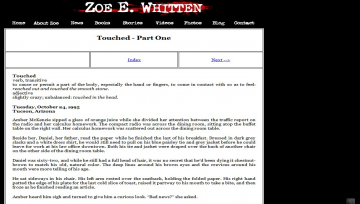 Touched by Zoe E. Whitten was one of the first Novellas the author posted on her website back in 2007. I read and enjoyed it at that time. Since then she has edited it, and the revisions have only served to improve it.

The story is tense and exciting as Amber tries to fight a supernatural enemy who, quite part from being evil, is targeting her because she’s immune to being possessed. An enemy who has already slaughtered her family. Fortunately she has help from a transvestite D&D mage, and his vampire flatmate – which is a lot less silly than it sounds. It’s not a comedy, though it does have some darkly comic moments – especially when Vicky the Vampire is on-screen. This is a good thing since the story could easily be too grim without moments of humour.

The story has a great sense of time and place. I love the bit where Amber is researching the danger on the internet and uses Gopher, because I remember doing the same thing at that time (though it was never life or death for me). The web has become soentwined with the net in our minds that it would be easy for an author to make the mistake of having her use the web. But that would have beenanachronistic – the paint was barely dry on Mosaic at the time. The fact that Amber uses the net to research at all marks her as slightly nerdy. That’s probably why I like her so much.

Which brings me to the characters. They are well drawn, three-dimensional and immensely enjoyable. The characters drive the plot as much as they are driven by it. Always good. :-)

I do need to mention point of view. Zoe uses a form of omniscient third person where you sometimes see the thoughts of more than one character in a single scene. It’s a stylistic choice which some readers may find off-putting. Omniscient is hard to pull off (this is why writing books say to avoid it, it’s not wrong unless it’s done badly but it’s usually done badly) but she seems to have managed it, since it doesn’t annoy me here, and I’m usually the first person to shriek about "head-hopping". However I mention it here because some readers find omniscient confusing even when done well.

On the whole I found Touched to be an excellent story back in 2007 and the editing has only served to improve it.